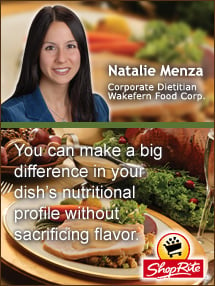 A traditional holiday dinner often means roast turkey and stuffing, buttery mashed potatoes, green bean casserole, sweet potato casserole, buttery dinner rolls, and more, followed by an array of rich desserts. But these days, it’s not uncommon for someone at the table to have diabetes, be on a reduced cholesterol or low-sodium diet, or simply be watching his or her weight. So why not lighten things up? You don’t have to give up your favorite dishes. By adding more fruits and vegetables to the menu, as well as making some healthy substitutions to traditional recipes, you can make a big difference in your dish’s nutritional profile without sacrificing flavor.

Here’s how to lighten a few holiday favorites …

Mashed Potatoes
Use Yukon gold potatoes, which have a light yellow color, dense and creamy texture, and rich buttery flavor, and use evaporated skim milk instead of whole milk or cream. Reduce or eliminate butter, or substitute trans fat free margarine. For a twist on the traditional, make garlic mashed potatoes. Cook chopped fresh garlic in a small amount of skim milk and add it to mashed potatoes.

Sweet Potato Casserole
Sweet potatoes are a nutrient powerhouse. However, the traditional sweet potato casserole is typically loaded with butter and brown sugar. For most recipes, you can easily cut the butter and sugar in half without impacting flavor, thanks to the sweet potato’s natural sweetness. You can also add naturally sweet ingredients such as raisins or currants, and seasonings such as cinnamon and vanilla extract. Skip the streusel that often tops this casserole, and instead try a simple sprinkling of chopped nuts.

Green Bean Casserole
A casserole of canned or frozen green beans, cream of mushroom soup, and milk or sour cream, topped with French-fried onions, is a long-standing staple on many holiday tables. This quick-and-easy casserole is simple to lighten up by using low-sodium and low-fat cream of mushroom soup, skim milk or fat-free plain yogurt instead of sour cream, and reduced fat cheese. To get the flavor and crunch of French-fried onion rings without the fat, spray an equal amount of chopped onions and fine dry plain bread crumbs with nonfat cooking spray. Bake at 350°F until golden brown (about 12 minutes). Use to top casserole.

Dressing/Stuffing
Cooking dressing separate from the turkey is one of the easiest ways to reduce fat (because the fat drippings won’t soak into the dressing). Use reduced sodium broth instead of drippings to moisten the dressing. Try using whole wheat bread instead of white bread. Double the amount of vegetables, and get creative with exotic ingredients such as shiitake mushrooms that add flavor without adding fat. Boost flavor by using low-sodium seasoning and fresh herbs instead of additional salt.

Bread or Rolls
This one’s easy. Go for whole grains.

Dessert
Try serving up some healthier treats along with your richer recipes to give options. Serve angel food cake topped with fruit puree, apples drizzled with fat free caramel sauce, or just offer a selection of assorted sliced fruit paired with a yogurt dipping sauce.