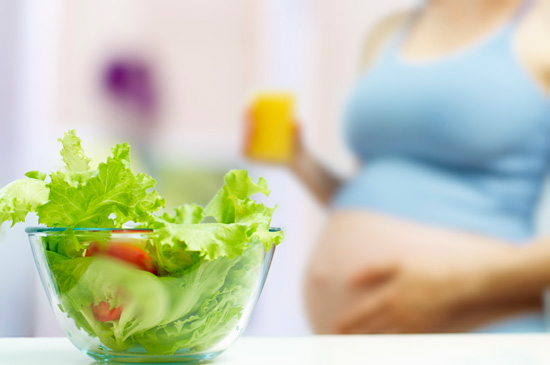 Maternal nutrition has tremendous and lasting impact on the offspring’s health and disease susceptibility later in life. The periconception period is a critical time in fetal development as this is the time preceding, including and immediately following conception.2 Research demonstrates that poor nutrition during the periconception period, specifically underconsumption and overconsumption, may lead to negative health outcomes in offspring that include metabolic disease, obesity, cancer and osteoporosis. Poor nutritional quality during pregnancy may also lead to negative maternal health outcomes, including obesity, excessive gestational weight gain, and postpartum weight retention. Unlike other negative and uncontrollable exposures, such as genetics, maternal diet is a modifiable factor in long-term child health and wellbeing. Due to this connection between maternal and child health, expectant mothers are encouraged to consume a balanced diet rich in whole grains, fruits, vegetables, legumes, lean protein and healthy fats.

Previous research has already established striking disparities in diet quality based on income, socioeconomic status and race or ethnicity in the United States. To better understand what programs and initiatives are needed to support expectant mothers, the purpose of the present study was to evaluate pregnant mothers’ dietary habits in an economically, racially and educationally diverse population of pregnant women.

The Nulliparous Pregnancy Outcomes Study: Monitoring Pregnant Mothers-to-Be is designed to evaluate maternal and environmental contributors to poor birth outcomes. The study, which began in 2010 and has collected information on participants ever since, includes women who were <14 weeks gestation in their first pregnancy. Women participated in a total of three (3) study visits during pregnancy and one (1) at delivery. In total, 10,038 women agreed to participate in the study, of which 7,511 women had complete dietary data available. Women self-reported their highest level of education, race or ethnicity and income status. Dietary data was collected by means of self-reported questionnaire and measured adequacy intake via total fruit (other than fruit juice), whole fruit, total vegetables, greens and beans, whole grains, dairy, total protein foods, seafood and plant proteins, and fatty acids. Additionally, intake of refined grains, sodium and empty calories were measured.

Non-Hispanic white women comprised 69% of the participants, 18% of women were Hispanic and 13% women were non-Hispanic black. More than half of the women (54%) had a college or graduate degree and only 18% had a high school education or less. Results of the study demonstrate only about half of women met the recommended standard for total fruit, whole fruit, greens and beans and total protein categories. Fewer than 10% of women met the dietary guideline for whole grains, fatty acids, sodium and empty calories categories. Higher level of education was associated with greater nutritional intake in all three (3) racial or ethnic groups. As maternal education increased, so did the likelihood of meeting dietary.

Additionally, the average daily intake from added sugars was 14%. That’s a lot of sugar! The greatest contributor to added sugar intake was sweetened beverages: soda, sports drinks and energy drinks. Soda was the main contributor to energy intake in Hispanic women and those with only a high school degree.1 Women’s consumption of empty calories (the total sum of daily energy intake from solid fats, added sugars, and alcohol) was also far too high. Nearly 35% of all daily calories consumed were empty, far exceeding the recommended empty calorie allowance of 9% to 13% of total energy.

Pregnant women should place emphasis on eating whole foods before and during pregnancy and reduce intake of processed foods, soda and empty calories. Such foods are low in nutrients and high in added sugars and solid fats. A whole foods diet is comprised of whole grains, fruits, vegetables, legumes, lean protein and healthy fats. We recommend that women who are planning to become pregnant fill half their plate with fruits and vegetables during every meal and snack to help meet nutritional recommendations during pregnancy. We also recommend swapping sweetened beverages such as soda, sweetened ice teas, energy drinks and sports beverages for water whenever possible. These beverages provide empty calories and little else. Also try infusing water with fresh fruit for added nutrients and flavor.