It’s Easy To Celebrate September As National Fruits & Veggies Month!
GET THE TOOLKIT
Log In Sign Up
About the expert

After years of working with clients one-on-one, I’ve realized that the key to healthy eating and optimal health boils down to one thing, eating enough of the right foods, especially eating enough produce!

When I’m working with my clients, I’m not looking at their usual diet and thinking of all the things they “shouldn’t be” eating.  Instead, I’m looking for opportunities for them to eat more produce, in all forms such as canned, frozen, and fresh. It’s all good for you, it’s all-important, and it’s all vastly under-consumed. That’s why I love the message, “Have A Plant.”  It’s simple, and yet the most important place to start any meal!

This month, I wanted to share these grilled veggies in foil packets because it’s one of my to summer recipes.  We’re often grilling up all kinds of random meats on the grill, especially in the summertime.  We grill, 110 Degrees in Arizona or not, better to keep the heat outside, right?  We love sausages, burgers, marinated chicken breast, and sometimes I get fancier.  I have full foil packet meals like my sausage and veggies packet meal, barbecue salmon meal, and my fajitas foil packet recipes.

However, most of the time, we’re grilling up meat by itself, so I throw on these grilled veggies in foil to make sure that we Have A Plant at our meal!  Plus, they are so yummy and delicious I can never make enough to have leftovers, even if I double the recipe these veggies disappear FAST!

How to Make Grilled Veggies in Foil Packets 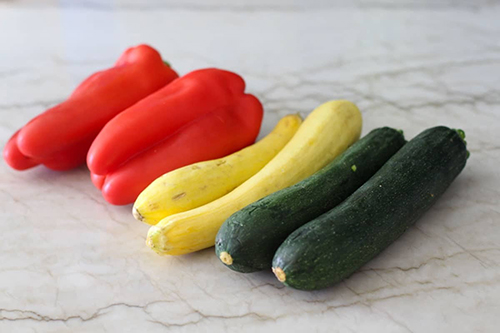 Start by cutting your veggies into sticks.  I’d suggest keeping the sticks thicker so that the veggies don’t get mushy.  Can you swap out the veggies for other veggies? Yes! Just be mindful of cooking times.  Certain vegetables like green beans and carrots take much longer to cook, so cut them up smaller, so they cook before burning on the bottom.

Next, you’ll toss your veggies with seasonings and oil.  I like avocado oil because it holds up well under high heat (aka doesn’t smoke.)

I should also mention that I love this central coast barbecue seasoning, but you can also use the spices I listed below if you don’t want to buy a brand new seasoning blend.  I do use it all the time because I make these veggies packets ALL THE TIME.

Next, you’ll top with some parmesan cheese, you can use grated instead of shredded, but it will not melt. 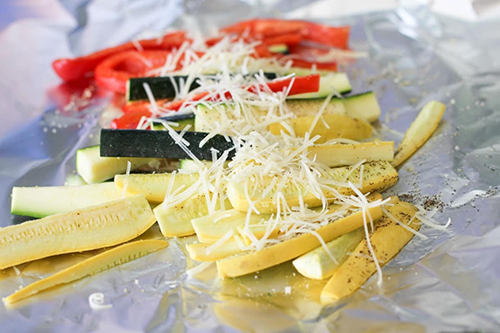 Next, you’ll fold up your veggie foil packets and place them on the grill for 15 minutes. DO NOT FLIP THEM. Just let them get a nice char on the bottom, and the cheese will melt on the top, don’t mess it up by flipping the packets!  I promise your patience will be rewarded! Enjoy!