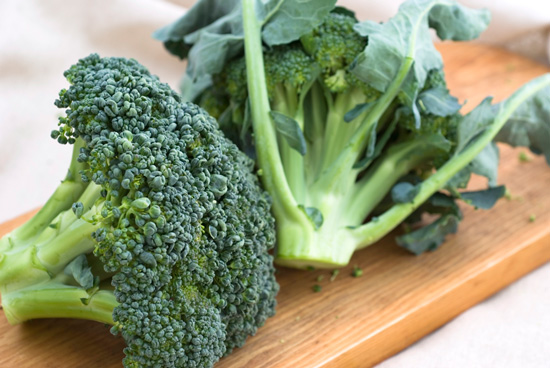 Cancers of the head and neck, collectively referred to as head and neck squamous cell carcinoma (HNSCC), are strongly associated to chronic exposure to alcohol and tobacco. Nearly 40,000 individuals in the U.S. are diagnosed with head and neck cancer annually, and HNSCC makes up roughly 90% of head and neck cancers.2 Survival rates for HNSCC is about 50% five years post-diagnosis. HNSCC is particularly dangerous because this type of cancer has very high rates of second primary tumor (SPT), meaning that the cancer returns. SPT occurs in 3%-6% of individuals who developed a first primary tumor. While smoking cessation helps to lessen the immediate chances of HNSCC, studies show that the 5-year average of HNSCC of individuals who quit smoking is still at higher risk of HNSCC than those who have never-smoked. Previous studies have been unsuccessful in finding strategies to reduce initial HNSCC tumors and SPT.

Cruciferous veggies, such as kale, broccoli, cabbage and cauliflower, are associated with a reduced risk of HNSCC and SPT. These veggies induce enzymes that promote detoxification of chemical carcinogens, which cause cancer, that are found in tobacco smoke. Sulforaphane, a phytochemical found in broccoli, is 20 to 50 times stronger in broccoli seeds than in mature broccoli plants. Phytochemicals are an array of compounds produced by plants that have significant positive health impacts.3 Researchers have suggested that there are probably around 4,000 various types of phytochemicals found in grains, legumes, nuts and colorful produce. At this point in time, research has shown that BSE extracts promote the rapid detoxification of airborne pollutants. Scientists are exploring various cancer-preventing broccoli seed-based preparations to protect against carcinogen-induced cancers.

To investigate the protective effects of sulforaphane against HNSCC, the present study examined sulforaphane’s impact on normal cells and in HNSCC cancer cells. The study consisted of two parts: the impact of BSE intake in mice and in humans. In mice, BSE greatly influenced the development and size of HNSCC tumors. While the mice receiving BSE still developed some tumors, the tumors were significantly smaller than the mice who did not receive BSE. In fact, the median tumor size in the BSE mice was 94% smaller than the other group of mice.

In humans, individuals were given different BSE beverages rich in sulforaphane or topically exposed to sulforaphane-rich BSE. Oral tissue was collected from each participant, and the BSE beverage showed great bioavailability through absorption in the oral tissue. This finding means that drinking sulforaphane-rich beverages has been demonstrated to be an effective and sustainable means to add a powerful cancer-fighting, plant-based nutrient into your diet.

Sulforaphane may help to prevent normal or compromised cells from transforming into HNSCC cancer cells, especially in individuals where exposure to chemical carcinogens is high. This study, unlike many studies of specific nutrients, assessed the effectiveness of the nutrient in both rodents and humans. Many studies do not have much initial application, even when findings are positive, because rodent testing does not always indicate an intervention will be applicable to humans. This study is part of a larger trend of research focusing more in cost-effective and widely applicable interventions based upon plants or their simple extracts.

While the best form of prevention is to abstain from smoking tobacco products altogether, there are many individuals exposed to environmental carcinogens through secondhand exposure to tobacco smoke. Children in particular are at the greatest risk for exposure to secondhand tobacco smoke. This study demonstrates the powerful potential that plants have to prevent and even reverse damage caused by environmental carcinogens.