One of the latest cooking fads is spiralizing.  This is taking vegetables (primarily) and paring them down so they become ribbon like–similar to linguini, spaghetti or fettuccini.  As the popularity of the method has grown, the tools of the trade have become more plentiful.  There are a wide variety of spiralizing options from which to choose, full, counter-sized appliances to hand-held versions that will also do the trick.  A bit more traditional, but an option that works just as well, is a julienne peeler, which can be found at any kitchen department store home area.
The bonus of spiralizing your veggies is to give them a different texture and create new recipes that will enable you to lighten up traditional dishes.  For example, a recipe that would have been created with pasta can now be made with spiralized zucchini or a combination of pasta and zucchini, which will significantly reduce the calorie content of the dish, as well as increase some nutrients.  It’s also a fun way to get your kids to start eating veggies since these curly spirals look more interesting than the usual veggies they are used to seeing on their plates.
Zucchini Noodles and Grilled Shrimp is reminiscent of Shrimp Scampi, but you’re using zucchini instead of pasta and this recipe calls for some fresh cherry tomatoes as well.  In addition, it’s got a wonderful Lemon Basil Dressing made from garlic, almonds, basil, fresh lemon, shallot, red wine vinegar, red pepper flakes, and olive oil. 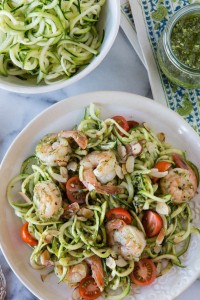 Photo courtesy of What’s Gaby Cooking
Butternut Squash Noodles with Shredded Brussels Sprouts, Walnuts and Caramelized Onions is a great winter dish.  You’ll use in-season produce, along with some garlic, red pepper, and olive oil in this recipe.  It’s a hearty meatless entrée, packed with fiber and nutrients. 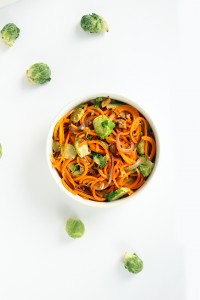 Photo courtesy of Inspiralized
Creamy Spinach and Sweet Potato Noodles with Cashew Sauce is another hearty, yet vegetarian dish you’ll want to try.  The “noodles” are made from spiralized sweet potatoes and wilted baby spinach is added to the dish.  The creamy sauce is made from cashews, water, salt, and garlic.  Herbs and olive oil further enhance this dish. 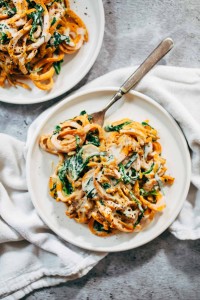 Photo courtesy of Pinch of Yum
These recipes are just a few ideas for spiralizing.  For more, visit Pinterest and enter “Spiralizing Vegetable Recipes” or Google the same. Next week I’ll be taking a look at a popular Polish holiday tradition–pierogies.
See all posts