My friend and neighbor, Sadhana, is Indian and has recently introduced me to her culture’s culinary’s delights.  She is vegetarian so the dishes she prepares take advantage of all sorts of fruit and vegetables, especially those that are flavorful and in-season.  While recently at her home, I told her my favorite legume is the chickpea, also known as the garbanzo bean.  She happened to have some she had recently prepared for an Indian gathering and offered some to me.  They were delicious–very spicy with lots of herbs.  Many times while talking, we’ve gotten on the subject of cooking and I thought it would be a great subject to share an Indian recipe with my readers and feature some of the most common spices used in Indian cooking since they are key to the unique flavor of the dishes.  According to Sadhana three key spices are most commonly used:

The following recipe Sadhana provided was one she felt wouldn’t be too spicy for my American tastes and includes my personal favorite–chickpeas!  I also like the addition of the mixture of other veggies like cauliflower, tomatoes and okra.  This is a hearty vegetarian dish you can use for your Meatless Monday entree meal.  Just add a bit of bread or a side salad–you’ll be cooking your own Indian curry!  Sadhana has even provided a shortcut to the original recipe to make it easier.  Enjoy! 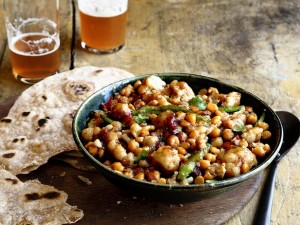 *Soak the chickpeas overnight in cold water, drain and place in a large pot.  Wrap the bay leaves, cinnamon stick, cardamom, cloves and peppercorns in a piece of cheesecloth and tie with twine.  Add to the pot along with 8 cups of water.  Bring to a boil, skimming off any foam from the surface.  Reduce heat to medium and simmer until chickpeas are tender, about 50 minutes.  Strain the chickpeas, reserving the cooking liquid and spice bundle.*  (You can substitue 1 can of chickpeas and water for this step.)  Meanwhile, pulse the quartered onion, ginger and garlic in a mini food processor to form a paste.  Heat the vegetable oil in a large pot.  Add diced onion and cook until browned, 6-10 minutes.  Add 1 1/4 teaspoons salt, the turmeric and cook until fragrant, about 1 minute.  Add chickpeas, tomatoes, 3 cups of reserved cooking liquid (or plain water if you’re using canned chick peas) and spice bundle); simmer until thickened, about 20 minutes.  Add the cauliflower and cook until slightly tender, 5-6 minutes (add more liquid if needed).  Stir in the okra and cook until just tender, about 5 minutes.  Discard the spice bundle.  Stir in the lemon juice and cilantro and season with salt.

About The Buzz: A Vegetarian Diet is Better for Your Health and the Environment?

About The Buzz: A Vegetarian Diet is Better for Your Health and the Environment?