It’s Easy To Celebrate September As National Fruits & Veggies Month!
GET THE TOOLKIT
Log In Sign Up
Thanks to innovative preservation techniques, we can enjoy a variety of fruits and veggies not only during the summer, but year round. Our farmers and growers treat the land with respect to ensure we can enjoy optimal flavor and quality of fruits and veggies – from bushel to fridge to freezer to shelf.

Trust farmers who eat their own crop. Meet some of Oregon Fruit’s growers and farmers, with a passion for putting the freshest produce on our tables: 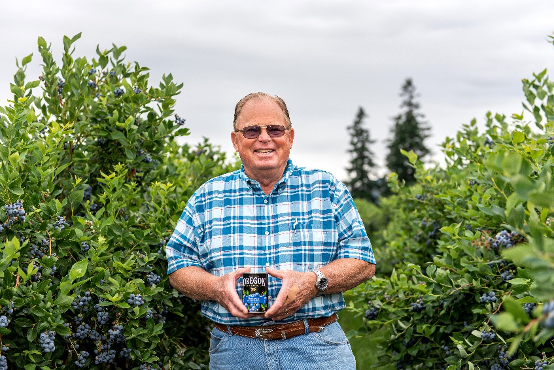 “We’re gonna give you the best of everything we do here.” – Phil Olson

Take Phil Olson, blueberry grower with Oregon Fruit: “We buy ‘em from the shelf,” he says. “If we’re traveling someplace, I take along a can of Oregon Fruit blueberries.”

Phil Olson’s been growing fruit for over 40 years. He started from zero, after seeing a for-sale sign on the farm. His dad, a lifelong stockbroker who always wanted to work in agriculture, helped Phil secure the initial loan. Phil developed the irrigation system, planted high-intensity fruit crops, and a few years later, entirely paid off the initial loan. Eventually, the farm grew so productive that he started farming full-time. The hard work and risks — especially his dad’s initial financial support — paid off. Even though his dad’s gone now, Phil’s farm thrives. He named it Red’s Mountain Blueberries in honor of the old man.

“We pride ourselves on having the best.” – John Maberry

Even though John Maberry didn’t expect to end up working the family farm, having studied aerospace engineering — “I probably could’ve picked a better major for being a professional farmer” — he loves it. He puts his engineering study to work designing and refining specialty equipment, since the raspberry industry is too small for the big equipment companies.

John Maberry’s farm uses integrated pest-management techniques that lower their need for crop-protection materials, so their soil is healthier, and their fields are safer for workers. But everything comes back to flavor and quality. “We pride ourselves on having the best,” John says. “When they’re in season, and you’re driving around the fields, it’s hard not to just eat ‘em off the bush.”

“It’s not the same grind every day,” he says. “We move from planting to getting the fields ready to pick to harvest to taking the fields out and pruning. We’re always doing something different. It’s just nice.” 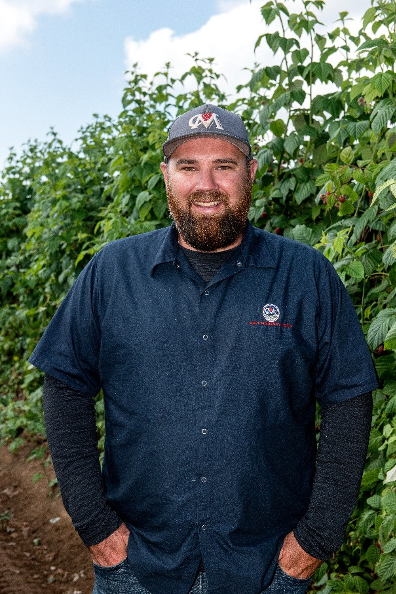 Matt Maberry co-owns and operates his family farm, one of the world’s largest raspberry growers and processors, up near the Canadian border, in Lynden, Washington. Sandy loam soil. Warm summers and good, cold winters. The perfect place for growing raspberries.

Today, under the stewardship of the fourth Mayberry generation, the Curt Maberry Farm grows 1,000+ acres of raspberries, strawberries and blueberries. “It’s our goal to keep it in the family and keep the family tradition going,” Matt says. Matt and his family farms this land with respect, making sure their employees, neighbors and kids are safe and cared for, recycling, drip irrigating and using cover crops to keep their soil healthy, and developing sustainable practices and long-term business strategies. It’s all aimed at keeping the farm alive for the next generation.

The other secret? “We respect our fruit,” Matt says. “And our kids eat ‘em frozen all year round. We make pies. Jam. Smoothies. You know about raspberry pizza? I’ll have to ask my mom what that is. It’s like a dessert crust with some kind of — I don’t know, but it’s good.”

Fresh Produce from Field to Shelf