Brussels sprouts get a bad rap.  They’re commonly known as the veggie used in threats (“If you don’t behave I’ll make you eat a plateful of brussels sprouts.”)  And, kids everywhere usually turn up their noses when they see brussels sprouts are on the dinner menu.  I happen to be an oddball in this category as brussels sprouts have always been a favorite of mine.  I’m convinced that so many people dislike them because they aren’t having them prepared correctly.  Trust me when I tell you that knowing how to cook these delicious veggies can make a world of difference in their flavor and texture. 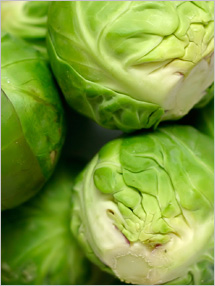 While I favor eating all forms of fruit and vegetables, there are times when fresh is best.  When preparing brussels sprouts, I find using fresh, rather than frozen always works better.  I think it’s because the frozen variety can hold on to some water, which can result in a “spongy” sprout.  Just remember when cleaning fresh sprouts, discard any discolored or wilted outer leaves before cooking.

Since I love brussels sprouts prepared in any form, I would be fine if they were simply boiled and had a little butter, salt and pepper added to them.  But for most people, you’ll want to prepare them in a way that brings out the best flavors of the veggie.  Roasting is an easy way to accomplish this.  You can add them to other roasted veggies, like onions, potatoes or carrots or try a recipe like Roasted Brussels Sprouts with Apples from Fruits & Veggies–More Matters.  Cider vinegar and fresh thyme blend together to bring out the flavors of the fruit and veggie. 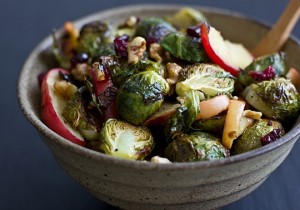 Another flavor you’ll find goes very well with brussels sprouts (and is quite popular across the board) is bacon.  You can add it to them if roasting, but I found a recipe that might work even better for family members who don’t care for brussels sprouts since you “shred” the sprouts.  Serve Shredded Brussels Sprouts with Pancetta and your family members may not even recognize that this dish includes brussels sprouts!  Rosemary, lemon juice and olive oil blend in to add flavor to this dish. 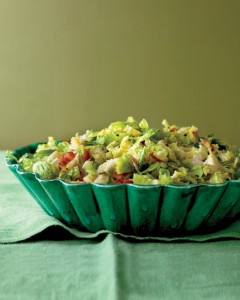 Something I keep in mind when cooking brussels sprouts is to cook them so that they are tender, but not overcooked.  You don’t want the sprout to be too hard, but you also don’t want it to be mushy.  I hope these recipe ideas will encourage you to try some new cooking methods with brussels sprouts.  These tasty veggies are in season right now and at their peak of flavor.